The Story of divina art

In the late 1970s a young and dedicated alternative community of artists and artisans came into being in the newly revitalized Spittelberg district of Vienna. Their aim was, on the one hand, to enliven the neighbourhood by organizing public activities, and, on the other, to live autonomously and independently of societal constraints by selling their products directly. They founded the “Verein Spittelberg”, an association that organized regular open-air exhibitions. As the annual Christmas market became increasingly popular, the work of Verein Spittelberg became deservedly recognized and served as a model for a wide variety of initiatives in the alternative art and culture scene. 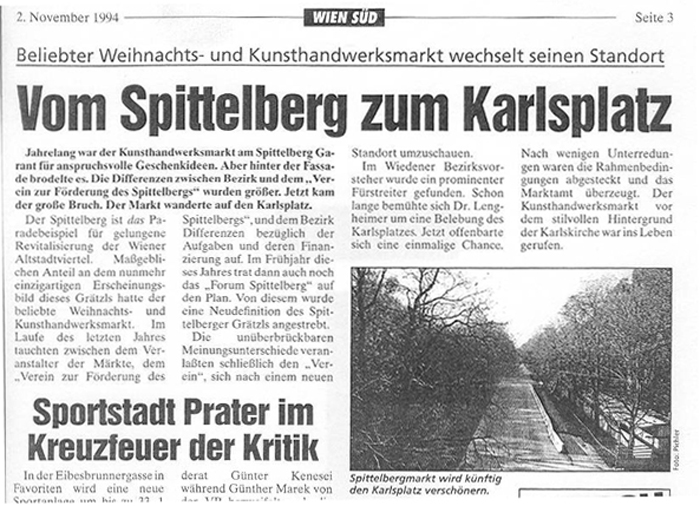 After many successful years, however, the municipality of Vienna withdrew its permit for this event and instead, Pius Strobl, a politically influential entrepreneur in the catering industry, was issued with the necessary permit in 1994. However, as many artists and artisans felt that they would not be able to work autonomously or maintain the high quality for which they had become known with Mr Strobl as organizer, some dedicated members began to look for alternative public locations in Vienna. A new non-profit organization was founded and thanks to the support of the then District Prefect, Dr Lengheimer, the first event took place at the new location in front of the Karlskirche (Church of St Charles) in December 1994. Since then, divina art has organized regular events at this location.

In the meantime, our open-air exhibition “ART ADVENT” has become one the most popular events in Vienna in the pre-Christmas period.